The last night of the boat league 2020 was a hard one with very few fish caught. Les Grant Gets the box of FARIO FLIES and Ally Kennedy wins the boat league voucher. Stewart Inglis has joined as the angler representative on the Boat League Management Committee. 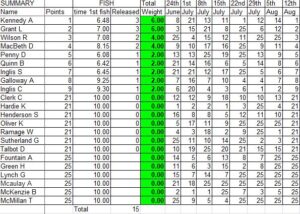 The 15 anglers landed 81 fish. Bill Ramage was first with 15 trout and wins the free night fishing in the boat league. In 2nd place was Craig Inglis with 10 fish and 3rd place was Grant Sutherland with 8 fish. As Craig as already had two prizes, Grant picked up the fine box of FARIO Flies.

With regards to recent events. On the 29/07/20 two anglers had their catch returns disqualified as they did not fill out their cards properly. That night they were meant to fill out there opponent’s card and sign it prior to handing it in at the end of the nights fishing, but instead they filled out their own and made an honest mistake of which the two fisherman both agreed including the Lakes committee to have their catch returns voided in a sportsmanship way.

THE MANAGEMENT COMMITTEE HAVE NOT ACCUSED ANY ANGLER OF CHEATING. TO RE-ITERATE WE ARE ONLY TIGHTENING UP PROCEDURES. THIS MATTER IS NOW CLOSED.

Regarding the bigger picture, and more importantly, we need to let you know of the passing of our friend and boat league participant Peter Forest. Peter lost is battle with cancer. He managed a brief outing at the Lake shortly before he went. He will be sadly missed by us all and we would like to offer sincere condolences to his friends and family. Next week there will be a moments silence for Peter at 6pm before the last heat. He would want us all to enjoy our fishing.

Due to recent discrepancies in catches reported, before and after the last heat on 29/7/20 relating to that night and previous nights and also due to this years boat league being considerably shortened due to the pandemic, the Management committee of the Boat League (Quint Glen, Douglas Fraser and Connor Shearer) have decided that there will be no final placings this year with no winner’s awards. It is proposed that this year’s registration fee will be given to charity. The boat league will continue for two more weeks and FARIO flies and vouchers will be up for grabs in the usual manner. Anglers will be required to fill in their own catch card after each fish and this will need to be signed by their boat partner. Boat pairings will not be randomised for these two nights – partners can be selected by participants.

On the last night (29/7/20) the top rod was Craig Inglis with 16 trout on an intermediate line. Craig gets the FARIO FLIES. In second position was Grant Sutherland with 11 trout. Grants gets the free MENTEITH BOAT LEAGUE voucher. One boat was disqualified due to failure to complete the catch cards in the manner that was requested on that night.

Next year the recording system will be that you record your own catches as they happen and your boat partner signs the catch card if he is in agreement.  Unsigned cards will invalidate the catch. Annual Membership of the boat league will be subject to management approval and all new members will have a probationary period.

Any changes to the rules or motions can be proposed to management and if the proposer has two boat league backers – we can have a vote. All members must vote or officially abstain. Previously when asking for votes from members there has been a very poor response.

We hope you approve of the new set up which we think will keep the boat league alive and well and the members happy going forward. 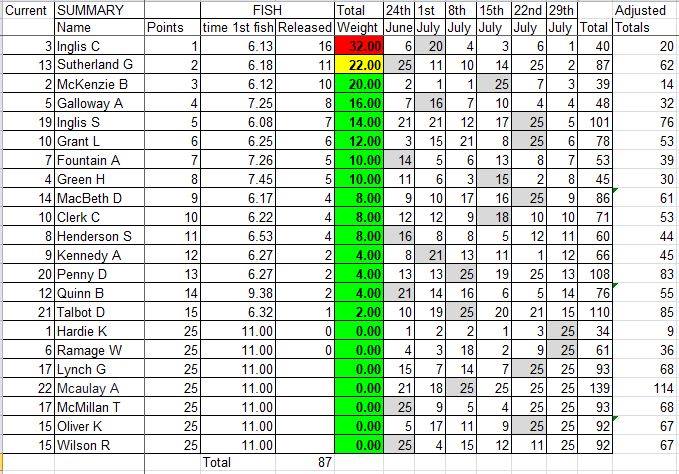 On the first night of the shortened 2020 Menteith boat league sponsored by Fario flies, 19 anglers including 7 newbies went on and caught 80 fish. The winner was Keir Hardie with 12 fish catching his first at 6:30, he was fishing up at the cages using a Di7 with cormorant’s he wins a Fario fly box with some flies. 2nd was Brian MacKenzie also with 12 fish but as he caught his first fish at 7:01 he came 2nd, he was fishing from stable point out to squirrel island, he started with a Di7 then came up to a Di5 then onto a floating line with dries, 5 of his fish were over 5lb, he wins a voucher for a free boat league night.  Les Grant was 3rd with 10 fish. He also fished from stable point and was using a midgetip line with a snake. He had a nice brownie about the 5lb mark.

Bill Ramage was winner of the 18th Boat League.

Bill took home £500 prize money and a box of 300 FARIO FLIES and a bottle of champagne. 2nd place Brian MacKenzie collected £150 and third placed George Whyte £50. Final placings are shown in the table below.

TOTAL SPONSORSHIP INCLUDING HEAT PRIZES AND FINAL AWARDS WAS £2252.

The Lake sponsored the Competition to the tune of £652. The anglers donated £520 in registration fees. Successful competition Angler Michael Low sponsored the competition with 720 flies of his FARIO flies worth £1080. We look forward to next years event and we ask anglers who competed to contact the fishery by email with ideas for improvements for next year. We will then put the best ideas to a secret ballot.

The 2019 Menteith Friendly Evening Boat league kicks off on Wed 1st May. NEW ENTRANTS WELCOME welcome. We are delighted that FArio flies have agreed to continue the sponsorship and the deal is similar to last years brilliant one – when Michael Low of Fario Flies gave away 300 flies as prizes valued at £450 (these will be selected by heat winners (20 FLIES AND A WEE BOX) from the Fario selection in the shop). Last year Michael also put into the mix a box of flies valued at £700 (the one Brian is holding in the picture below).

For more info or register by contacting (call or text) Douglas on 07752128489 or Quint 07710 433464 or turn up on the night – but a wee bit of warning would be good. The competition kicks off on the 1st of May and runs till 7th Aug this year. The Anglers kitty money £20/head will contribute to the £700 of cash prizes and there will be a vote by all entrants on how this is best distributed. All in there will be over £2000 worth of prizes to be awarded (including a generous donation to the winners charity of choice) and when it is considered that this is shared out between 30-40 anglers the prize per angler ratio can be appreciated!! The randomised boat partner system continues and the competition will be fished to Lake rules (no maximum fly size). Placings are awarded according to the number of fish returned with similar catches separated by the time of the first fish caught. Anglers are of course free to keep fish also for the table – according to the limit purchased. For more information or to enter, contact Douglas on 07752 128489 or Quint 07710 433464 (see also Lake contact page). Lake rules apply and final placings are awarded according to the members top 10 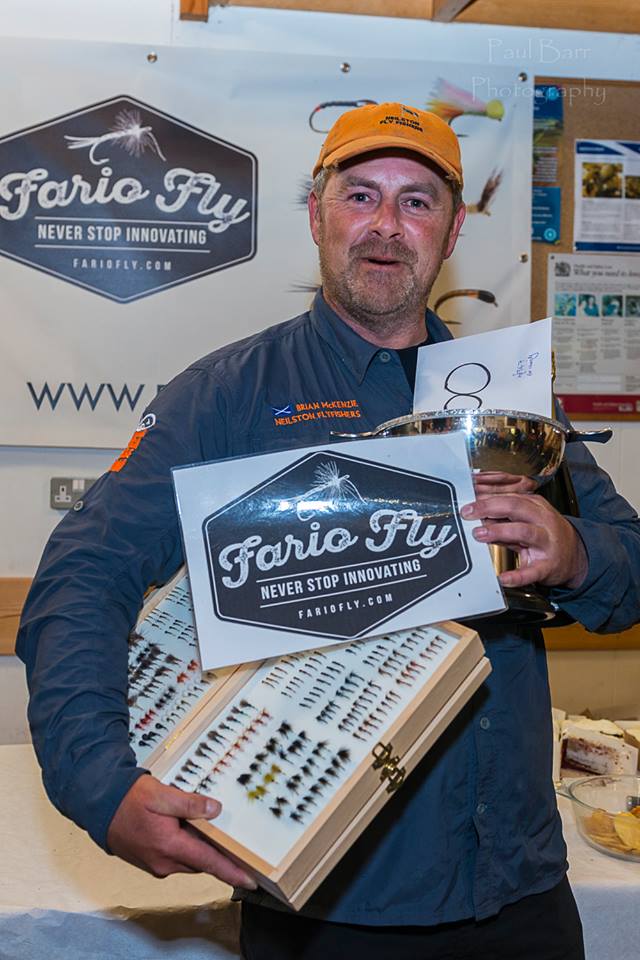 Inglis. Alex Galloway finished 3rd. The total value of prizes dished out over the piece amounted to £2565 and a huge thank you to Michael Low of FARIO FLIES for his massive contribution of flies and boxes valued at £1300. Thanks also to Andy smith of Southside Decorators for supplying the whisky and also to Menteith Fisheries for their contribution.More discussion to follow but needless to say Brian has used Fario flies throughout the competition and tonight and said he will be in contact with Fario flies re future pattern development. Brian won £500 in cash and £700 pounds worth of Fario flies as well as giving £347 towards his chosen charity MND Scotland.

Brian took the last heat to take the championship. He had 6 fish on his 5wt rod on boobies (3) and diawls (3) in the far corner of the cages on a floating line before moving to out in the middle and catching (5) on dries. In second place on the last heat was Andy Smith and Gil Farid with 7 fish. Full results below and more detail soon. Brian secret could not be summed up in a few words …I guess it is years of experience. He said next year he would like to see a greater spread in prize money. You will have a vote on a few options. Thanks to all for taking part and to Paul for the photos. 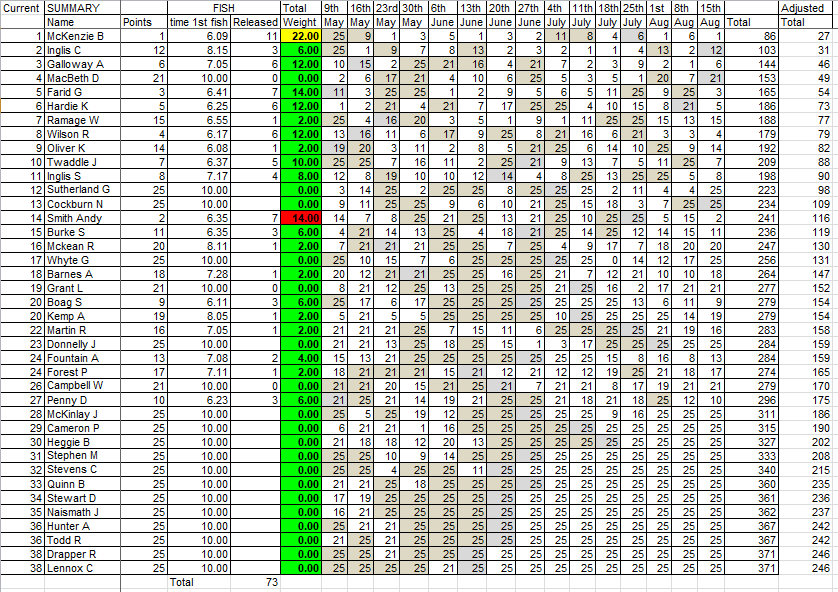